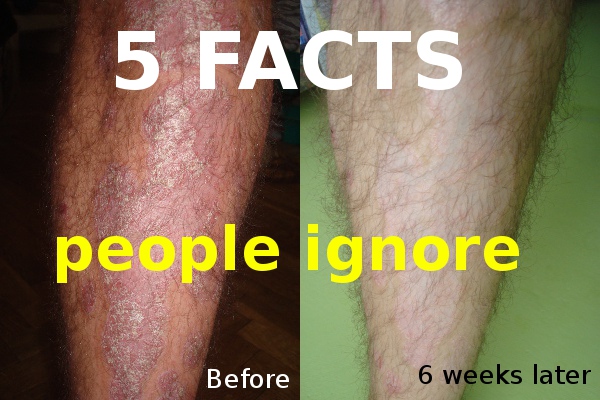 5 Facts Everybody Ignores About Psoriasis Cure

This post is about the 5 missing facts (almost) about psoriasis cause and cure which nobody cares about.

Psoriasis Gurus without much knowledge

I am not going to name calling anybody in this post but surely will give you the tips how to avoid the scammers and those who promote just general useless methods for improving the psoriasis.

Some of them are maybe just not informed enough or what but the others are doing the slow steps in order to brainwash you and buy useless products and follow useless tips.

You should never believe anything on the internet no matter how confident is the person who’s speaking to you. Always check the facts for yourself and make your own opinion.

The same goes about this blog where I present just my views on the subject. My opinions may not be right but it doesn’t mean that I am wrong. I can not guarantee you that everything shared on this blog is true even though I wish so.

I am just sharing my ideas and opinions.

I have to admit that real doctors win in this because they never claim they can cure psoriasis. All they say is that you can manage the disease with topical steroids, ciclosporine or eventually the last line of expensive biologic drugs but even then the clearing of the skin is not guaranteed.

However, most of those psoriasis gurus act as they know the way how to resolve everybody’s psoriasis.

1. Diet is not enough 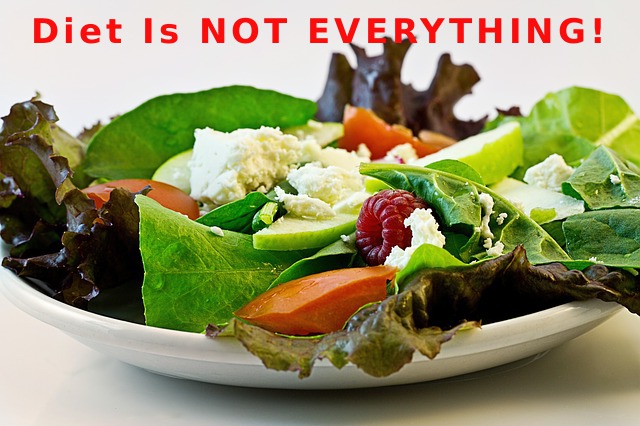 If anybody tells you that diet will cure everything he lies to you.

Good diet greatly helps and is important but does not cure everything!

Maybe in the long run it can resolve most health problems but what exactly is the “long run”?

I am all for taking the supplements and I believe supplements may tremendously help and you can see the progress in much less time than just with diet.

I am not pushing any particular brand of the products or one seller and always strive to recommend you the effective and affordable supplements.

There is a lot of supplement brands and most of them have some good products for good price and some products which I do not recommend because I think that quality (effectiveness) of the formula could be better.

2. One miracle supplement does not exist 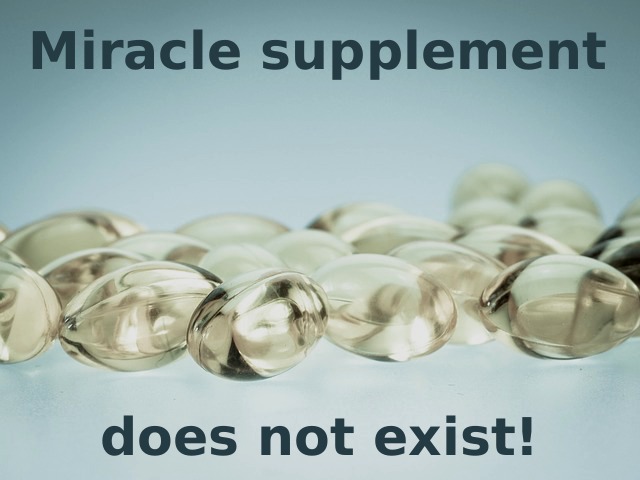 You may say “I know that there is no miracle supplement”.

So, why are you looking for and buying always some new supplements? Is there any other reason besides your wish that “maybe this will finally work”?

A lot of people think that if they benefited from some supplement then everybody will. This is simply not true because even though the pathogenesis of psoriasis is same down the stream, the processes leading to that part of biochemistry which everybody with psoriasis share may be very different.

So it would be stupid if I was telling everybody that the cause of psoriasis is leaky gut (inflamed small intestine) if there would be dental infection.

Those who had infected root canal tooth would never get well just by following the good diet.

3 Juicing will cure you? 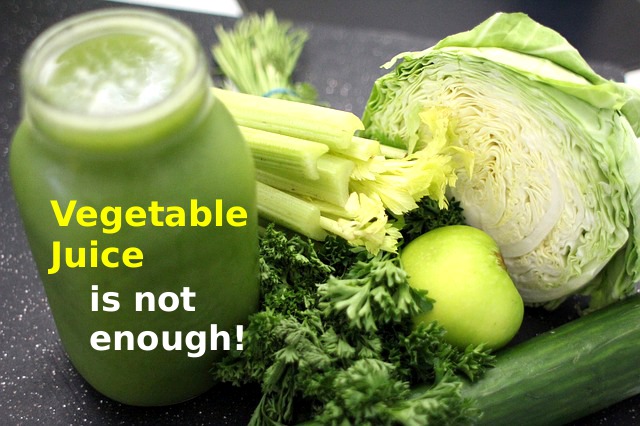 No, it may help and even bring the body back to its natural balance but it is not the ultimate answer.

First, juicing the fruits is not so healthy because in order to get enough protein from fruits you would have to drink so much juice that the sugar content would be really unhealthy.

Also juicing the vegetables is not so healthy if you rely just on vegetable juice.

For example broccoli is one of the popular vegetables you can juice but it contains the chemicals which may be helpful if you ate 2 pounds (about 1 kg) of broccoli daily but probably not when drinking 1 liter of broccoli juice.

There was a case of 56 years old woman a few years ago whose liver enzymes were significantly up after drinking the broccoli juice for 4 weeks before liver tests.

After discontinuing the daily dose of 800 ml of broccoli juice the liver enzymes went back to normal within 15 days.[1]

If you would want more convenient way how to get sulforaphane or you want to avoid other chemicals in broccoli (like Indole-3-carbinol) you can buy the sulforaphane supplement.

The positive effects of sulforaphane on psoriasis related inflammation were confirmed also in scientific study.[5]

4. Everybody ignores the dental infections 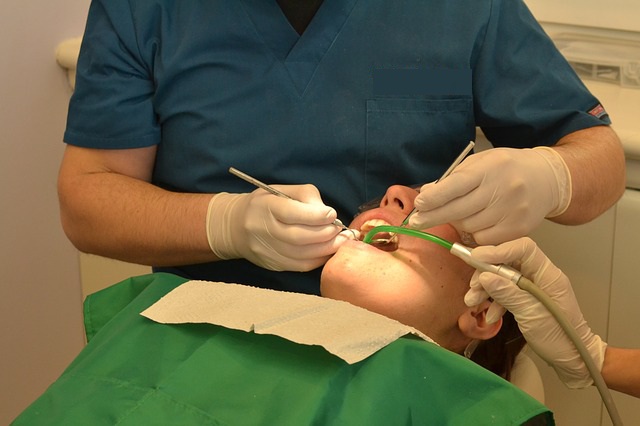 What more can I say?

I have mentioned dental infection almost in every discussion I have been involved. People still do not get it and underrate the significance of root canal teeth and severe tooth decays in pathogenesis of chronic degenerative diseases including cancer.

Toxins found in root canal teeth block the production of basic molecule of energy in our body – ATP. Do you really need more to understand the catastrophic effects of dental infections and keeping the dead teeth stuck in the jaw?

How many critical enzymes do those toxins block? And how much inflammation do they induce along with bacterial endotoxins?

I can tell you that the answer is “a lot”!

Even if there was no other hormonal imbalance but adrenaline it would be still a huge problem.

Adrenaline constricts the blood vessels (also in the small intestine), puts you into the fight-or-flight mode and does not allow the body to heal. I believe that adrenaline and adrenergic dysfunction or dysregulation is often the culprit in many chronic diseases.

I can recommend you the book by Dr. Michael Platt, MD – Adrenaline Dominance. This book fits perfectly to this era when everybody is stressed. Dr. Platt knows that adrenaline causes a lot of chronic health problems when it is excessively produced in our body for a long time or maybe if the production cross the threshold just once like in case of PTSD.

Dr. Platt recommends a bio-identical progesterone cream as a way how to break the vicious cycle of excessive insulin production induced hypoglycemia followed by adrenaline release.

Another author I would strongly recommend you to follow is Jurriaan Plesman who writes about hypoglycemia and its effects on our mental health. Diagnoses like OCD and other anxiety disorders and panic attacks are easily explainable when thinking about the effects of adrenaline on our brain when it gets released at the wrong time. 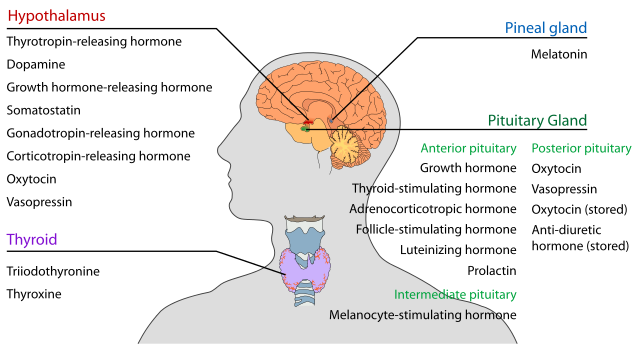 And it is not just about the adrenaline in psoriasis. If there is an intestinal inflammation there will be whole lot of other hormonal problems. Inflammation induced insulin resistance may significantly mess up not just insulin levels but also lead to hypoglycemia and vicious cycle of adrenaline production.

Conclusion? Use your own brain…

Unless the psoriasis guru you follow does not care about the problems described above in this blog post I would not believe in his or her abilities to do something positive about your psoriasis.

There are some doctors or just people without MD who are trying to do their own research and know a lot about the psoriasis and generally how the body works. However, most of those who promote some diets on the internet or YouTube they just had some success with their own psoriasis and think that everybody will have.

Unfortunately this is not likely because if you are now reading this the chances are you already tried a lot of different approaches and diets which have failed.