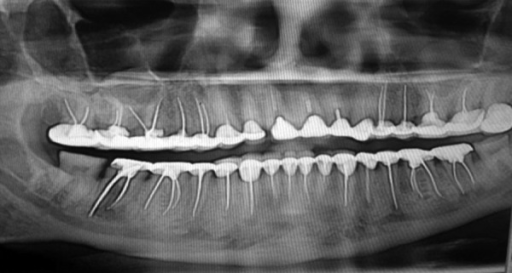 Root Canals May Cause Psoriasis

This is not the first post mentioning the root canal link to psoriasis on this blog. Leaving the dead piece of bone-like structure – tooth – in the body is one of the craziest and most killing procedures “modern” medicine does today!

I am not going to rewrite here all the facts against the root canals (endodontic therapy). The point of this post is to give you directions to recommended books, videos and to make you start thinking about the safety of root canals.

This is very important for those with psoriasis or any other chronic inflammatory disease.

A lot of people with root canals today “feel” that those teeth feel somehow weird or even a little bit painful but they ignore that because they believe that doctor did a great job for them.

But what if your doctor still didn’t reach the point of realizing A LOT of IMPORTANT THINGS?

What if your doctor never though about the toxicity of dead teeth left stuck in the jaw?

In medicine there is no other procedure besides the root canal therapy which is trying to make use of dead part of the body and intentionally trying to keep and save it in the body.

Why would anybody care?

Then those people treated with root canal therapy become the patients and great source of income for pharmaceutical companies.

Dentists know how bad are the root canals

During the root canal therapy a dentist remove the pulp which contains the blood vessels and nerves supplying the tooth.

Fortunately there are some dentists like Hal Huggins, who sadly passed away in November 2014, the dentists who educate the others and research the detrimental effects of amalgam fillings and root canals.

One of them is Dr. Stuart Nunnally DDS who published the paper about the enzymatic inhibition associated with toxins leaking from root canal teeth.

During the 3 years period Dr. Nunnally extracted 87 root canal treated teeth. All of the patients who decided to have their root canal teeth removed noted worsening of their overall health after the root canal therapy and their health providers mentioned them the connection between the root canals and systemic health.

All 87 root canal treated teeth radiographs were analysed by Dr. Nunnally and another 3 independent dentist evaluators. All of them unanimously agreed on 25 teeth to be included in the study. All of the included teeth must have had no signs of pathology or mechanical problems with the work done on those teeth by the dentists.

In other words the root canal teeth used in the study were successfully treated by modern medicine and also considered as safe since the patients didn’t reported any pain associated with those teeth. The teeth were extracted because the patients decided to have them removed due to other reasons than tooth pain.

The root fragments of the tested teeth were carefully prepared in order to minimize the impact of the restorative materials like mercury in fillings and metallic, ceramic or metalloceramic crowns.

All of the root fragments were washed three times in distilled water and then the water of the third wash was used to test the inhibition of each of the 6 enzymes. The inhibition was quantified by using a nucleotide photo-affinity labeling technique.

The enzymatic inhibition of the root fragments of these teeth was measured against the 6 commercially available enzymes which are naturally produced by the body and are heavily involved in generating the cellular ATP. All of the tested enzymes are critically important for the human health so any inhibition may cause serious health issues.

The average inhibition of the enzymes was 65.6% which represents a severe toxicity on the scale developed by Affinity Labeling Technologies (ALT) Bioscience Laboratory where the samples were tested. 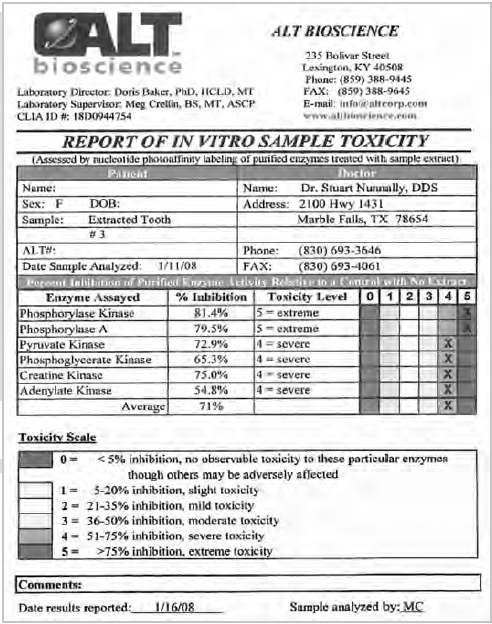 “Since no control group was used, it is difficult to know if these in vitro results have significant clinical relevance. It is impossible to know if root fragments from properly matched non-root canal treated teeth would produce less enzymatic inhibition compared to root fragments derived from root canal treated teeth. It is also difficult to correlate these in vitro findings to a patient’s clinical health status. It is also possible that the root fragments were contaminated by mercury or other substances even though samples were carefully chosen to minimize these effects. None of the root fragments were analyzed or cultured. These results, therefore, can only be considered very preliminary in nature.”

What do the tested enzymes do?

Pyruvate kinase – this is a crucial enzyme for the red blood cells. This enzyme is involved in the last step of glycolysis where the pyruvate is formed. Genetic problems with this enzyme or toxicity which negatively affects the enzyme will result in energy depleted red blood cells. You can imagine how it may affects you when 25 000 000 000 000 red blood cells which should flow through your body and carry the oxygen into the tissues get depleted of energy.

Phosphoglycerate kinase – this magnesium dependent enzyme is involved in the first step of glycolysis. Deficiency of this enzyme is linked to muscle diseases (myopathies), mental disorders and hemolytic anemia.

Adenylate kinase – an enzyme responsible for energy homeostasis in cells. It is also a magnesium dependent enzyme so deficiency of this mineral will affect the enzyme activity as well.

Note: Glycolysis is a conversion of glucose (the main carbohydrate nutrient we get from starches and sugars we eat) into pyruvate. The energy released during this process is used for making the ATP – the main fuel for the cells.

Low energy production in cells = low detoxification capabilities and weak performance of every one cell!

There are more books about the root canals and their detrimental effects on the body but you might want to check at least one of these three:

Where to find a biological dentist?

For most people all over the world it is hard to find some good biological dentist since there is not so much of them. However the International Academy of Oral Medicine and Toxicology has the form on its website where you can start looking for some biological dentist in your area – http://iaomt.org/find-a-doctor/search-for-dentist-physician/

Those who can not afford to travel and pay for the biological dentist they must decide if they visit the regular dentist for the amalgam fillings removal and root canal teeth extraction.

Mostly the root canal teeth removal is often a critical process since there may develop the cavitations at the sites of previous extractions if the periodontal ligament stays in the jaw.

Books about the dangers of root canals

Uninformed Consent : The Hidden Dangers in Dental Care by Hal A. Huggins and Thomas E. Levy

I recommend you also to check this article by Hal A. Huggins as well as his video presentation about the root canals.

Keep in mind that your health should be only your own responsibility so do not believe anything you learned here or hear from anybody.

The best thing you can do is to use your brain and think if it makes sense that piece of bone-like structure – tooth – when cut off of blood supply starts to rot and bacteria invade it.

Would you want to keep that rotting tooth in your body 24/7 for the rest of your life?

It might be the root canal what caused your psoriasis…