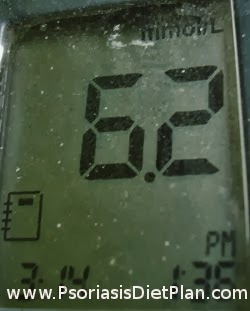 Glucose Levels In the Blood From Psoriasis Plaques

The fact that psoriasis is linked with the insulin resistance is well known.[22]

Personally I have noticed that the circles around my psoriasis plaques are so constricted that skin around them looks very pale compared to normal skin.

Those pale circles of the adjacent skin around the psoriasis plaques are called the Woronoff  rings. One study concluded that the injection of prostaglandin E2 about 1 cm from the Woronoff ring caused the redness of the ring. The prostaglandin E2 directly causes the vasodilation. As I have mentioned before I think that there is impaired blood flow in the psoriasis plaques also due to constricted vessels (endothelin).[189, 190]

Let’s say that fasting blood glucose from normal skin was 6,0 mmol/L (108 mg/dL) and from the psoriasis plaque it was 8,0 mmol/L – 10,5 mmol/L (144 mg/dL – 189 mg/dL) or even higher. I have used just the basic, but probably accurate glucose meter since I compared the glucose levels with the professional blood work test results and they matched.

But don’t start thinking about some complicated causes of these results with the high glucose levels in the blood from the psoriasis plaques. There is probably just one reasonable explanation for this results.

The blood glucose is so high because (of constricted blood vessels and) the blood is stuck there not moving (glucose stays in the blood in the psoriasis plaque) and also there are probably some other chemical conditions that the home glucose meter for diabetics evaluates as high blood glucose).

And one of those chemical conditions may be that the blood from the plaque is probably without the oxygen – hypoxic. That is supported by the scientific papers which concluded that low oxygen in the blood cause that the glucose meters based on glucose oxidase method show significantly higher blood glucose levels. And (vice versa) when person breathe the concentrated oxygen the measurements of the blood glucose may be lower than they are actually.[23]

So despite that there are the scientific papers (and common opinion) which concluded the increased blood flow in psoriasis lesions I think that the blood doesn’t flow through them as easily as suggested.[117, 118, 119]

Another supportive argument is that when I have tried to take the niacin to see if the blood from the plaques wold move after the niacin flush. The result was that even the niacin flush was not able to dilate the blood vessels around (or in) the psoriasis plaques to the point that the glucose meter would measure the same levels of glucose as from the normal skin blood. The glucose meter show after the flush (almost*) the same high readings.
* You can’t compare it exactly since the readings are quite different even from the same plaques.

If you swipe the blood from the psoriasis plaque a few times and measure the glucose from the later blood the glucose levels will be as from the normal skin.