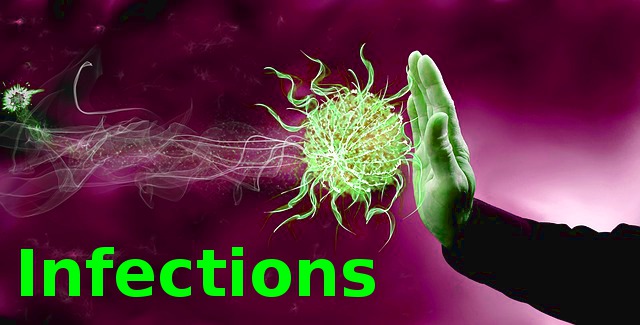 Why the Body Can’t Kill the Pathogen In the Skin?

Weak immune system – is the cause if you would like to have a name for it.

Chronic mycoplasma infection will develop for example if you are stressed over a longer period of time, not sleeping enough, SIBO – due to low stomach acid which leads to pancreatic and biliary (liver) insufficiency = low assimilation of fat soluble vitamins A, D, E, K and essential fatty acids. That’s why it has so huge positive impact on psoriasis when you start using the fish oil supplements.

B12 is also a problem of low stomach acid and stomach problems (parietal cells in the stomach secrete the intrinsic factor which binds to and transfer the B12 vitamin) what plays a role in B12 absorption.[134] Also the iron deficiency may develop due to low stomach acid or because of the SIBO and subsequently developed systemic bacterial infection when immune system intentionally lowers the free iron in the body because iron is needed for bacteria to live and proliferate.[84]

However later in the disease like psoriasis it is probably a real problem with low iron stores in the body due to low absorption, high loss through the rapid developing skin cells and inflamed small intestine epithelial cells.[93]

That’s why it is very convenient to use lactoferrin supplements which binds the iron (also steals it from the bacterial biofilms in the intestines) and transport it to the cells of your body where it is needed. [25, 26, 27]

If you have low iron in the body the vicious cycle goes on since the red blood cells (when deficient in hemoglobin) can’t carry the oxygen very efficiently, which in turn weakens the immune system, pathogens proliferate, body increases the inflammation which leads to more fibrin in the blood, the blood gets thick which leads to worse RBC circulation which in turn leads to lower oxygen content which leads to more bacteria which thrive in the low oxygen environments. Then the bacteria create the biofilms (it is the same coating as you have in the mouth on the teeth every morning) etc., etc., the vicious circle goes on and on.[28]

The longer you have psoriasis perhaps the higher toxicity, more deficiencies and pathogens are in the body!

Many harmful bacteria/mycoplasmas/viruses thrive in a hypoxic environment and probably so they do in the skin where psoriatic patches have developed.

Actually everything you will do to fight off the hypoxia will help your skin – niacin flushes (first have to be on diet and other supplements, otherwise it can really worse the psoriasis), workout, running, walking in the fresh air, raw food, blood thinning with omega 3+cinnamon+turmeric (thin blood gets more easily through the small vessels), drinking enough water, supplementing with the enzymes.

Enzymes from raw food or supplements will get into the blood mostly if you take them on the empty stomach and then they clean the blood from the unwanted proteins, fats, many various molecules and fibrin which forms the blood clots (often micro-clots in psoriatics). Nattokinase is great for dissolving the blood clots. [135, 136]

Body has not enough oxygen

The end problem in psoriasis is probably the low oxygen in the body what means low oxygen concentration in the tissues, which in turn weakens the immune system.

Also the bacteria in the blood (because of weak liver and leaky gut) trigger the coagulation process.[194, 195] The blood is continually more and more thicker, bacteria can proliferate, and the body have still work harder just to cover the basic functions. That’s the point where can a patient got the very clear symptoms of the disease like – embolism, heart attack, stroke, chronic fatigue syndrome, Raynaud’s syndrome, type 2 diabetes, cold hands and feet, fibromyalgia, psoriasis, etc.

Low oxygen in the body may be caused also by problems with RBCs – red blood cells production and their flowing through the body.

Common factors that may affect the oxygenation of the body tissues

– overgrowth of (bad) bacteria in the intestines
– root canals (bacteria live in those dead teeth and release the toxins to the body that interfere or block many extremely important enzymes needed for right function of the body)
– tooth infection (even when you don’t have root canal), even the dental cavitations (the “empty” place where the pulled tooth was often doesn’t heal properly) are rich source of bacteria since they are not so well supplied by the blood (white blood cells, nutrients and oxygen)
– deficiencies (mostly B12, B9 – folate, B6, Iron, Zinc, Magnesium, Selenium, Iodine, etc.)
– heavy metal toxicity (mercury, lead, cadmium, copper, nickel, etc.)
– permanent long term stress (body in stress turns off/lowers the priority from all other systems like immune system, digestive system, etc.) It literally goes from the state when it builds and repairs to stress state – fight-or-flight.[137] You can help relieve the stress naturally using the supplements and herbs.[52]