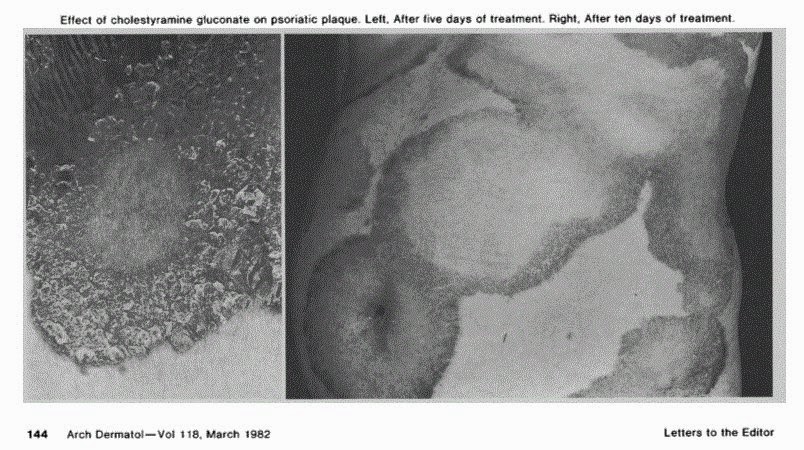 But after the introduction of statins cholestyramine use for this purpose is just marginal. However, cholestyramine properties made it valuable in treatment of psoriasis. Despite the official medicine statement that psoriasis has no known cause – which is popular even up to these days – it is well known that psoriasis develops when bacterial toxins (endotoxins, LPS-lipopolysaccharides) poison the body (liver). One of the effects of bacterial toxins in the blood is that they raise the sensitivity of the immune system really high – and this state of the body then we can call the “autoimmunity” or “inflammation”.

Cholestyramine is capable to bind also to these bacterial toxins and that’s why it helps to improve or totally clears up the psoriasis plaques. The effects of cholestyramine on psoriasis are known at least from 1962 when “The Journal of Investigative Dermatology” published the report “The Clinical and Biochemical Significance of Taurine Excretion in Psoriasis” where the author Dr. Roe stated complete or partial clearance of psoriasis plaques after using the cholestyramine at dosages from 9.9-16.5 grams per day for 2-11 months.

The initial clearing of the plaques was observed in about 5-10 days from the start of the therapy. However the dose required to continual improvement of the psoriasis varied between the patients.

Another mention of positive cholestyramine effect on psoriasis was published in 1982 and the authors mentioned also the “astoundingly overlooked 1962 observation” of Dr. Roe that all 12 patients treated with cholestyramine improved.

Despite the fact that cholestyramine effects on psoriasis were first described at least 52 years ago, this treatment didn’t get enough publicity. The thing is that the drug patent has expired so there can be a lot of possible manufacturers what means a lot of generic manufacturers = very low financial profit. Also it would certainly suppress the new and expensive biologic drugs sales. It is a shame considering the fact that cholestyramine has much less serious side effects on the body when compared to biologic immunosuppressive drugs, steroids, ciclosporine or low dose chemotherapy.

Today you can hear just from a time to time that somebody cleared his psoriasis after taking cholestyramine prescribed for some other problem (mostly IBS – Irritable Bowel Syndrome).

Why not to take cholestyramine for psoriasis?

First and the most important answer is that it is not a cure. The plaques start to reappear just about one week later after the cessation of cholestyramine.[2] Another problem with cholestyramine therapy is that it can cause the constipation, malabsorption of important vitamins – mostly A, D, E, K, and can lead to a tooth problems (discoloration, tooth decay) from direct exposure to the drug.

And again we are here – bad/poor liver function and deficiencies – cholestyramine won’t cure the liver it just masks the problem by removing the toxins that would be detoxified by proper bile flow (bile acids) and functional liver detoxification capabilities.

Then as you may know from reading my previous articles the psoriatics have usually low bile flow so binding the bile acids using the bile acid sequestrants like cholestyramine can cause even more damage in those patients.

How to help the liver?

Liver function can be addressed by taking the UDCA (ursodeoxycholic acid) that can be prescribed by the doctor. And what about the deficiencies? The most important are B-complex vitamins and vitamins A, D, E and K. The last four of them are the fat soluble vitamins and their absorption is significantly diminished when bile flow is low. If the low bile flow problem has been present for years then serious deficiencies of these vitamins may be present.

Zinc is probably the most important mineral when it comes to take just one mineral for those suffering with psoriasis. All minerals and vitamins are important but zinc is the one that is low almost ultimately in all psoriatics.

Activated charcoal as a substitute for cholestyramine

If you would like to try the cholestyramine like therapy then you can use also the activated charcoal which can be used without the prescription and is considered safer than cholestyramine. But still you have to prepare for taking about 12 grams of activated charcoal (the best is powder) in 3 divided doses during the day. Activated charcoal/carbon is well known natural remedy for intestinal problems and some people use it also for lowering the cholesterol levels (works similarly like cholestyramine). The daily dosage can goes up to 30-50 grams per day, but as I said it is not a cure. Some people may clear up their skin just by taking 1 gram per day and some take above 3 grams daily without any visible effect. However the high enough doses (above 10 grams per day) of activated charcoal will help most of the psoriatics I think.

The culprit with the activated charcoal is mostly the same as with the cholestyramine – binds the bile acids, vitamins, minerals and other useful elements in the intestines. It can cause diarrhea or nausea and less often some other problems. So short term (about 10-30 days) experiment with charcoal may be fine but I would not take activated charcoal continually for longer periods of time.