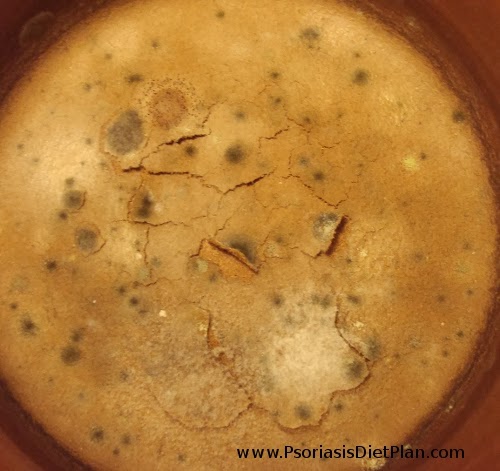 Mycotoxins In Psoriasis: Loss of Vitamins and Amino Acids

Mycotoxins can lead to psoriasis by many different biochemical pathways. In this post I will present to you the detrimental effects of mycotoxins on vitamin and amino acid status of the body.
Candida albicans is one of the single most blamed pathogens by people for various health conditions. However it is surely not just about the Candida or the other fungi that grow in our bodies.

Why is fungal infection bad in the first place? Because the toxins those microorganisms produce interfere with the protein synthesis, nervous system function and deplete vitamins and minerals.

Great portion of fungal toxins comes from the food we eat. Especially grains (beside the peanuts, coffee and alcohol) can contain a lot of mycotoxins that are extremely toxic and immunosuppression is one of the main effects we can experience.

Maybe you don’t know the aflatoxin what is a fungal toxin commonly present in various foods. The presence of this toxin in food supply is limited by laws but the problem is that we are exposed to it every day with almost every food (especially processed foods made from grains) including the meat from animals raised on those grains.

The authors there have summarized the effects of aflatoxin (produced by Aspergillus parasiticus) on chickens. I think that data based upon the effects of mycotoxins on poultry are relevant for humans because we eat the same grains and also the meat and eggs from the chickens raised on those grains. Mycotoxins are stored in fats and muscles of the animals so there is even higher exposure to mycotoxins for us when we eat the commercially produced meat.

The biggest differences were seen in plasma levels of the next vitamins: pantothenic acid, choline, pyridoxine and thiamine.

These 4 vitamins (included choline) are very important B-vitamins that are specifically involved in nervous system and adrenal glands. They are also not so easy to get from the standard diets, depleted by eating the processed foods (sugar) and now we can add to it the fact that they can be even more depleted by mycotoxins – all that can disrupt the homeostasis of the body to the point where psoriasis appears.

Just look what makes aflatoxin with the choline levels in the bile – 94% less of choline is found in the bile! Then thiamine and vitamin B6 – both are critical in order to have healthy (autonomic) nervous system but as you can see aflatoxin lowers the levels both of these two vitamins over 70%!

You may wonder why folate (vitamin B9) levels raise when chickens are fed with aflatoxin. The authors of the study think that it may be related to aflatoxin induced anemia. Folate is needed  for production of new blood cells.

The change (%) of amino acid concentrations in chicken blood plasma when fed no aflatoxin and aflatoxin at 2.5 mcg per gram of feed

All amino acids are important but I would strongly point out the significantly lower levels of cysteine and methionine what are the two amino acids that are heavily involved in detoxification (methylation cycle, SAMe, …).

That is why you should first get rid of the toxicity (fungi growing in your body, toxic environment you live in and food you eat) and then take supplements like NAC (N-acetylcysteine), methionine, glutathione or SAMe. Otherwise you just mask the symptoms by increasing the amount of good stuff so you will never experience the results like you would have when addressed the cause of the problem.

What are the effects of mycotoxins?

I hope you already know how much it affects/induces the psoriasis when body starts the inflammation after the detection of bacterial endotoxins. Mycotoxins can mess up the immune system so much that it starts to get very sensitive to bacterial endotoxins what may lead to hypercoagulation->hypoxia->oxygen deprived cells->bad functioning cells->Autonomic Nervous System dysfunction->psoriasis.

That’s why there will be no panacea (one pill cure everything) for psoriasis because you need to address every problem in your body – deficiencies (B-complex vitamins,…), toxicity (heavy metals, pesticides, drugs…), systemic fungal infections, SIBO, support the weak immune system (vitamin D3), etc…

Mycotoxins can also slow down the metabolism what may lead to obesity and uncontrolled weight gain. I think that this scenario is very possible, probable and real for a lot of overweight people. They may have to struggle with weight loss as much as we do with psoriasis. So it is not just eat less, exercise more and you will get lean. If systemic fungal infections (toxicity and vitamin deficiencies) make you fat then without addressing that infection one will have a big problems in losing those pounds off.

How mycotoxins deplete the vitamins and amino acids?

Vitamins and amino acids measured in this study could be lowered by various mechanism – impaired digestion, absorption, amino acid synthesis, higher needs of those nutrients to detoxify the mycotoxins, etc…

Fungal infections are nowhere near so “popular” and “number one suspect” in doctor’s office as the bacterial infections unless the patient specifically complains about some itchy rash. However, fungal infections are often hidden inside the body, blood, tissues, etc… And every antibiotic one take during the lifetime makes the fungus in the body just stronger. Then we end up with white coating on the tongue, various rashes, brain fog and after some time when nervous system gets dysregulated enough we develop psoriasis.

After reading this post and seeing the scientific data in the tables above you can see why it is (almost) useless to take RDA doses of various vitamins and other nutrients if you are infected with fungus and/or eat food full of mycotoxins. The fungus may take some of those nutrients for its own purposes but mostly body needs more of these nutrients to deal with the detrimental effects of fungal toxins and to eliminate them from the body.

On the other hand you may also not want to take grams of vitamins daily to manage some disease for life. The point is to remove the toxicity and overgrown fungus from your body. Oregano oil, neem leaf tea and possibly neem oil are great for that purpose.

Neem oil is usually stated as for “external use only” on the bottle but some people use it also internally. Those oils like oregano oil and neem oil are REALLY strong undiluted so they are usually used just a few drops 3 times daily in water or some other oil (olive oil).

The point with any herb is to take enough of it but also not too much since the herbs used in traditional medicines are usually strong and toxic in higher amounts.

Talk about the fungal infections and mycotoxins by Andrew Campbell, MD