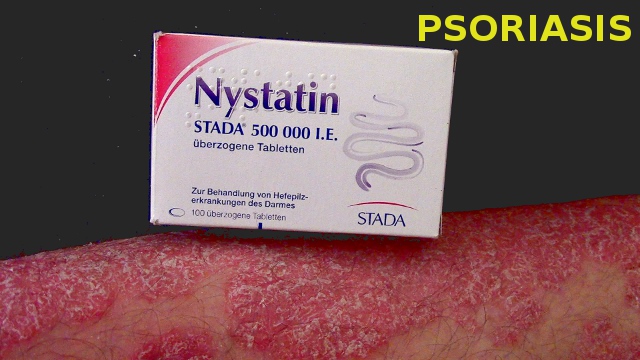 In this post I would like to support the connection between psoriasis, yeast infections and the fact that it is possible to cure psoriasis with Nystatin or some other antifungal drug.

Nystatin is not the only option for intestinal yeast infection, but the advantage of Nystatin is that it is powerful fungistatic and fungicidal drug with low intestinal absorption.

The fungistatic means that it does not kill the existing yeast cells but interferes with the growth of the new ones, the fungicidal drug also kills the existing cells.

How do Yeast Infections cause Psoriasis?

It is easy – yeasts and fungi – may cause the systemic inflammation. 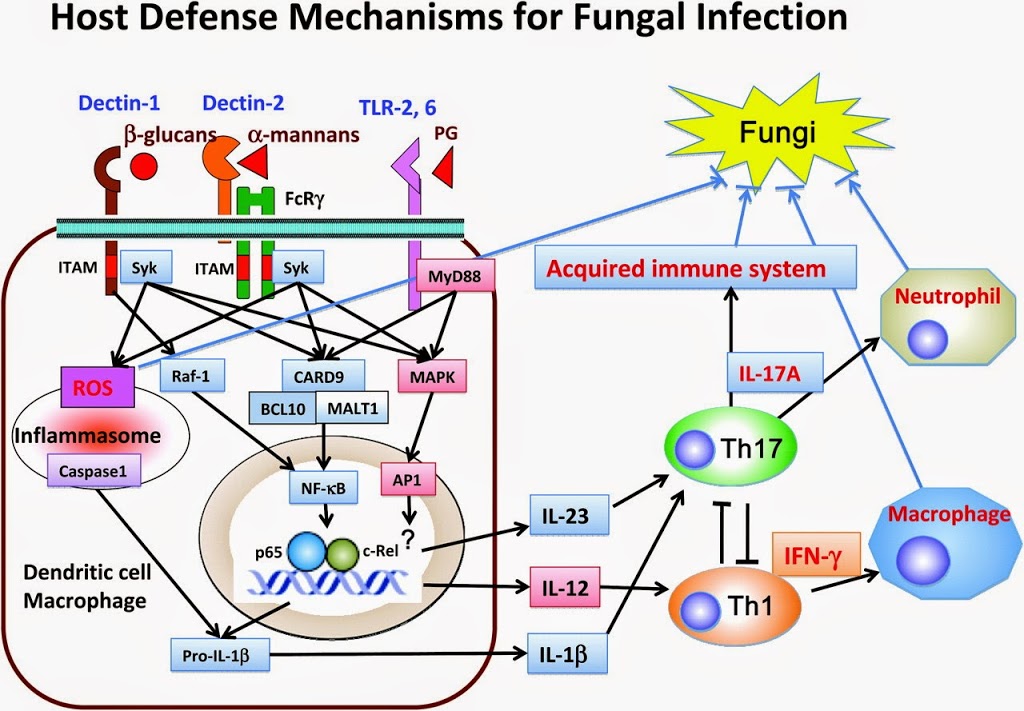 The mice study suggested “that gastrointestinal Candida colonisation promotes sensitisation against food antigens, at least partly due to mast cell mediated hyperpermeability in the gastrointestinal mucosa of mice.”[1]

In other words this means that if you have a Candida overgrowth in your intestines your body and immune system will be more sensitive to foreign protein like that from food.

This may explain why some people cleared up their psoriasis after they went on gluten-free or dairy-free diets.

The scientists in the 1960’s suggested that even the cells of Candida albicans themselves contain some endotoxin-like material.[2]

In psoriatics there is statistically higher prevalence of Candida albicans (and other Candida species) infections when compared to healthy population. There was one study done on 50 patients with psoriasis and 50 healthy people.[3]

Data source: Waldman A, Gilhar A, Duek L, Berdicevsky I. Incidence of Candida in psoriasis–a study on the fungal flora of psoriatic patients. Mycoses. 2001 May;44(3-4):77-81.

”
Qualitative analysis revealed a predominance of Candida albicans (saliva, 77%; faeces, 64%) and Candida rugosa (saliva, 28%; faeces, 28%). We did not find a correlation between the severity of the psoriasis according to the Psoriasis Area and Severity Index and the amount of Candida in the saliva or in the faeces. Our results reinforce the hypothesis that C. albicans is one of the triggers to both exacerbation and persistence of psoriasis. We propose that in psoriatics with a significant quantity of Candida in faeces, an antifungal treatment should be considered as an adjuvant treatment of psoriasis.
” [3]

Even though Nystatin is an over-the-counter drug in some countries it might be easier for you to get the probiotic yeast – Saccharomyces boulardii. 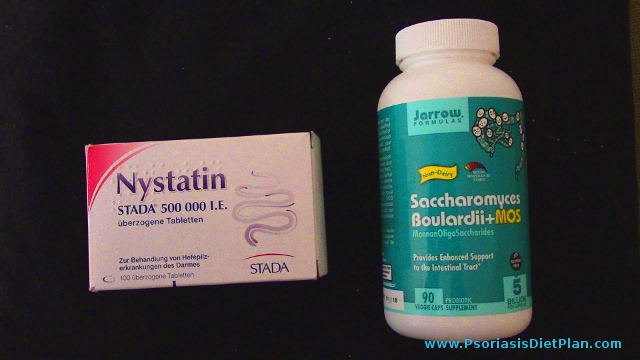 The study “Prophylactic Saccharomyces boulardii versus nystatin for the prevention of fungal colonization and invasive fungal infection in premature infants” concluded Saccharomyces boulardii to be “as effective as nystatin in reducing fungal colonization and invasive fungal infection, more effective in reducing the incidence of clinical sepsis and number of sepsis attacks and has favorable effect on feeding intolerance.” [4]

”
Feeding intolerance, clinical sepsis, and number of sepsis attacks were significantly lower in the probiotics group than in the nystatin group.
” [4]

”
Proven sepsis, feeding intolerance, and duration of hospitalization were significantly lower in the probiotics group than in the antifungal group.
…
Prophylactic L. reuteri supplementation is as effective as nystatin, and more effective in reducing the incidence of proven sepsis in addition to its favorable effect on feeding intolerance.
” [5]

Actually, I would guess that many other strains and species of probiotic bacteria would work as well.

Moreover, most probiotics contain the Lactobacillus reuteri in combination with other species of probiotic bacteria.

But if you know about any supplement containing just L. reuteri, please share the information in the comments below.

Psoriasis cleared up on anti-fungals

Here I present some testimonials about the antifungal and anti-yeast drugs and supplements like Saccharomyces boulardii.

You can find many more testimonials especially if you search for coconut oil or oregano oil.

I didn’t include them in here because one might say that coconut oil has some other effects which might play a role in clearing up psoriasis and oregano oil is also a strong anti-bacterial supplement.

“
I’ve suffered from psoriasis for over 10 years, this is the first thing I’ve used that has actually worked, plus I feel a whole lot better too! My psoriasis has nearly completely disappeared. Be careful of the detoxing though, for the first few days I felt really bad and had many muscle aches, pains and some headaches. This was just my body detoxing, all good stuff.
“

“
Hi Cynthia, I have had Psoriasis since 11 yrs. old. Today I am 60. I am one who has benifited from Nystatin. I discovered Dr. Crook’s theory and was perscribed Nyst. After 20 yrs. of being free I stopped Nyst. and in 12 months my Ps returned. Today I am back on and look great and feel great. I struggle that no one else wants to try this and they continue to Suffer. Grace
“

“
…
my dermatologist had me on Diflucan (which they use for yeast infections) and it worked after the entire month treatment. It didn’t come back for 3 months but, even the generic brand is $12.00 per pill and you take 2 per week for 1.5 months.
…
”

The researchers in study from 1979 concluded that Nystatin may not reach colon in sufficient amounts even when taken at dosages of 12 000 000 IU per day. This amount is the equivalent of 24 tablets (the most common tablet is 500 000 IU of Nystatin).[6]

”
Nystatin was administered in ten healthy adult volunteers in increasing doses of 3 X 10(6) I U, 6 X 10(6) I U, 9 X 10(6) I U and 12 X 10(6) I U per day, each dose being given for a five-day period. Faecal samples were collected daily for the determination of their concentration of biologically active nystatin. Nystatin concentrations were determined biologically; the sensitivity of this method was less than or equal to 20 mcg/g of faeces. During the four treatment periods with increasing doses, 38%, 31%, 26% and 20% respectively of the faecal samples contained biologically undetectable amounts of nystatin. This means that nystatin is either inactivated or unevenly distributed through the intestinal contents, or both. The practical consequences of this may be that in a significant portion of the colon there is no inhibitory nystatin concentration against Candida albicans, despite treatment with as much as 12 X 10(6) I U of nystatin per day.
“[6]

Nystatin helped many psoriatics but do not be discouraged if it would not worked alone for you!

The results proved that even after taking the equivalent of 200 tablets of Nystatin during the 20-day treatment there will be still 20% of feces without any biologically detectable amount of Nystatin.

The reason why there were no detectable amounts of Nystatin in some fecal samples was caused probably by the fact that Nystatin is unevenly distributed throughout the digestive tract and possibly also partially metabolized (like by some intestinal microorganisms).

The biologically active amount of Nystatin is about 78 IU per gram of feces.[7]

The data gathered during the use of Nystatin in infants proved that Nystatin is distributed in the gastrointestinal tract heterogeneously (unevenly) and the excretion “occurs discontinuously”.[8]

Nystatin is also a weaker drug compared to Fluconazole (brand name DIFLUCAN) so successful treatment of psoriasis may take longer.

The results of treatment of oral candidiasis in infants proved Fluconazole to be more effective than Nystatin.

”
Thirty-four infants were randomized to either nystatin oral suspension four times a day for 10 days or fluconazole suspension 3 mg/kg in a single daily dose for 7 days. Clinical cures for nystatin were 6 of 19 (32%), and those for fluconazole were 15 of 15 (100%), P < 0.0001. In this small pilot study fluconazole was shown to be superior to nystatin suspension for the treatment of oral thrush in otherwise healthy infants.
” [9]

However, much lower toxicity (due to very low absorption rate) of Nystatin compared to Fluconazole makes it a great choice for yeast infections.

Keep in mind that Nystatin is very toxic when administered intravenously! So, if you had any bad reactions after oral administration it might be caused by increased absorption from your gastrointestinal tract into the blood (whatever the reason is)!

In that case you should immediately contact your doctor and stop taking Nystatin.

How to take Nystatin?

If I used Nystatin as an antifungal treatment I would take 3 – 6 tablets (1 500 000 IU – 3 000 000 IU of Nystatin) per day. Six tablets is generally the highest recommended dosage but 3 tablets daily work usually well. Read the label on the bottle if you decide to take Nystatin on your own without the doctor recommendation and supervision.

Nystatin tablets are sold over-the-counter in Germany and can be shipped within the European Union.

It is about 30 USD for 1 month supply (100 tablets). Nystatin should start working for psoriasis and actually everything else caused by yeast overgrowth after about 2-4 weeks. The 3 months is the period after the most people should see if it works for them or not.

Actually, many people improve or cure their health problems (anxiety, psoriasis, fatigue, weight gain, …) on this antifungal. The sad part of the story is that the doctors in Europe mostly ignore this drug and in many European countries Nystatin is not marketed at all.

I agree that intestinal yeast or fungal infections are not the only cause and maybe even not the major cause of psoriasis.

The inflammation is the cause and it does not matter what causes that inflammation – emotional stress (hormonal imbalances), heavy metals, drugs, deficiencies, Candida or endotoxins.

The fact is that neither endotoxin levels or sensitivity to endotoxins is increased in very most cases of chronic diseases.

Maybe low cortisol or cortisol resistance causes the huge inflammatory reaction due to presence of (normal) amount of endotoxins, maybe it is a B-vitamin deficiency, maybe it is the Candida albicans causing the food sensitivity (inflammation is the result) and maybe it is some drug you take.

7) Blaschke-Hellmessen R, Schwarze U. Bioassay for determination of nystatin in faeces after oral application. Mycoses. 1990 Mar;33(3):129-35.

8) Blaschke-Hellmessen R, Pannwitz U, Schwarze R. Intestinal excretion of nystatin during and after oral administration to newborn infants at risk. Monatsschr Kinderheilkd. 1991 Feb;139(2):89-91.