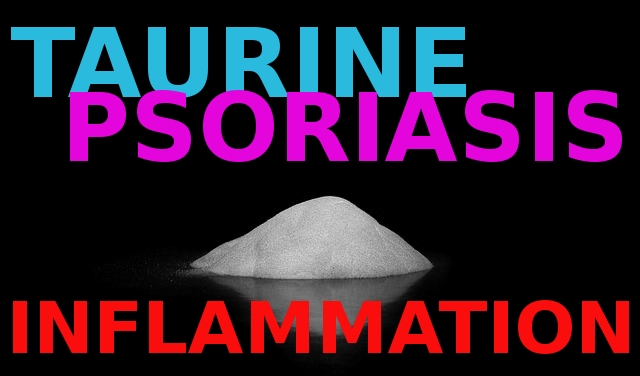 Psoriasis is not the most common term you hear when you read about the effects of taurine on health. You read usually about its positive effects on nervous system, liver (bile production and bile flow), heart but less about anti-inflammatory and possibly anti-psoriatic effects of taurine I am going to present here right now.

Psoriasis as you probably know from this blog is caused by Autonomic Nervous System dysfunction which in turn is (usually if not always) caused by systemic inflammation.

This inflammation is caused mostly by endotoxins (LPS) – the molecules from gram-negative bacteria – which if not removed by liver induce the inflammatory cascade resulting in production of TNF-alpha, NFkappaB, prostaglandins, interleukins and histamine.

Inflammation is good if it is fully controlled by our bodies, however, once it gets out of control for any reason it leads to various symptoms we call diseases.

Psoriasis is just one symptom of that out of control inflammation.

It makes sense that we may want to decrease that inflammation with supplements, diet and herbs; in order to get out of the vicious circle.

Taurine is one of those supplements which may greatly help us with that task. A big advantage of this supplement is that it is relatively cheap compared to most others solutions and it is very effective.

The other two of 3 most common reasons of inflammation besides the endotoxins or infection are deficiency and toxicity – but this is not the topic of this blog post.

Even though I have mentioned the term “reperfusion injury” before on this blog in relation to psoriasis I will give you an explanation of what it is here because you will meet with this term further below in this post.

What is reperfusion injury?

”
Reperfusion injury or reperfusion insult, sometimes called ischemia-reperfusion injury (IRI) or reoxygenation injury, is the tissue damage caused when blood supply returns to tissue (re- + perfusion) after a period of ischemia or lack of oxygen (anoxia or hypoxia). The absence of oxygen and nutrients from blood during the ischemic period creates a condition in which the restoration of circulation results in inflammation and oxidative damage through the induction of oxidative stress rather than (or along with) restoration of normal function.
”
Source: Wikipedia.com – https://en.wikipedia.org/wiki/Reperfusion_injury

In one in vitro rat study the researchers measured the effects of taurine on endotoxin (LPS) stimulated TNF-alpha production.

”
Activation of Kupffer cells by lipopolysaccharide (LPS) plays a pivotal role in the onset of pathophysiological events that occur during endotoxemia and intracellular calcium ([Ca2+]i) is involved in LPS-stimulated cytokine production. Recently, it was shown that Kupffer cells contain a glycine-gated chloride channel. Because taurine, a ubiquitous sulfur-containing beta-amino acid, acts similarly to glycine in neurons by causing hyperpolarization, it was hypothesized that taurine would act via a similar mechanism, blunting the LPS-induced increase in [Ca2+]i in Kupffer cells.
…
These results indicate that taurine activates a glycine-gated chloride channel in Kupffer cells causing chloride influx. In addition, LPS-induced TNF-alpha production was reduced by more than 40% by taurine, an effect that was also reversed by strychnine. In conclusion, taurine blocks the increase in [Ca2+]i due to LPS and significantly reduces TNF-alpha production by mechanisms involving chloride influx into the Kupffer cell.
” [4]

What can I say new here?

It is suspected if not confirmed that endotoxins play a major role in alcohol-induced liver disease. In other words it is not the alcohol what makes your liver suffer rather than endotoxins which are absorbed into the blood and go to the liver after you drink the alcohol.[1] 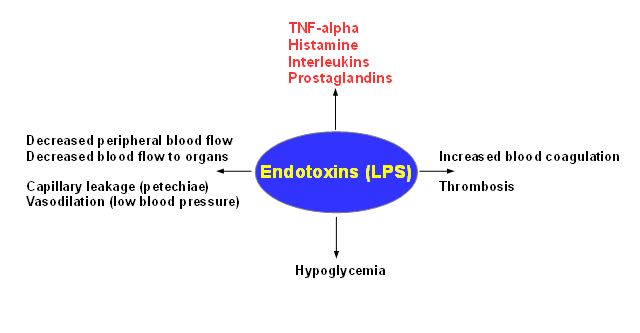 Does taurine decrease the amount of endotoxins absorbed into the blood from the gut?

”
Numerous studies have demonstrated that endotoxin plays an important role in the development and progression of hepatic cirrhosis. However, there is no effective remedy for the prevention and treatment of intestinal endotoxemia. Taurine has been reported to have beneficial effects on endotoxemia. Oats have been shown to absorb intestinal toxins and increase excretion of intestinal toxins. The present study was to investigate whether a combination of taurine and oat has an additive inhibitory effect on endotoxin release in a rat liver ischemia/reperfusion model. Our results showed that the combination of taurine (300mgkg(-1)d(-1)) and oat fiber (15gkg(-1)d(-1)) significantly reduced endotoxin levels in the portal vein by 36.3% when compared to the control group (0.168+/-0.035Eu/ml in the treatment group vs 0.264+/-0.058Eu/ml in the control group, P<0.01). The treatment of taurine (300mgkg(-1)d(-1)) and oat fiber (15gkg(-1)d(-1)) induced 21.5% and 18.4% reduction in endotoxin levels, respectively, when compared to the control group (P<0.05). We conclude that the combination of taurine and oat fiber achieved an additive inhibitory effect on intestinal endotoxin release, which might be an effective approach for the treatment of intestinal endotoxemia.
” [2]

And it is not just about the direct decrease of absorbed endotoxins. The further biochemical pathways involved in production of pro-inflammatory cytokines are downregulated by taurine, too.

The results of the study from 2004 suggest that taurine supplementation might be a potent tool against the intestinal inflammation as well.[5]

The rat study from 2009 aimed to “investigate the effect of pretreatment with taurine on liver injury changes and the change of tumor necrosis factor alpha and NFkappaB expression following rats limbs ischemia/reperfusion.”

Taurine proved itself as a valuable tool in attenuation of endotoxin induced liver damage after hepatic ischemia reperfusion injury (HIR).[3]

”
Wistar rats subjected to 30 min of hepatic ischemia followed by reperfusion and lipopolysaccharide (LPS) (0.5 mg/kg) administration, exhibited liver dysfunction (elevated serum levels of ALT, AST and LDH) and hepatic histopathological alteration. The serum levels of TNF-alpha and production of myeloperoxidase (MPO) and malondialdehyde (MDA) in liver tissues and apoptosis of hepatocytes were also increased after the combination of HIR and LPS. However, pre-administration of taurine protected livers from injury induced by the combination of HIR + LPS as the histological score, apoptotic index, MPO activity and production of MDA in liver tissues, and serum levels of AST, ALT, LDH and TNF-alpha, were significantly reduced.
” [3]

Finding the right dosage of any supplement may be tricky.

Even though Taurine is one of the safest supplements the recommended dose per day is usually around 3 000mg.

Some people (mostly athletes) often consume up to 10 grams of taurine a day or even more in order to improve their physical and mental performance even though the research is contradictory in this area.[7, 8]

Taurine as a mental performance enhancer found its way years ago into an energy drink industry. By the way energy drinks are not healthy nor safe and surely are not a good source of taurine.

Despite taurine being present in animal products and the content of taurine in meat is relatively high (3-10 grams of dried weight per kg), generally it is not possible to ingest 10 grams of taurine in various animal meats a day.