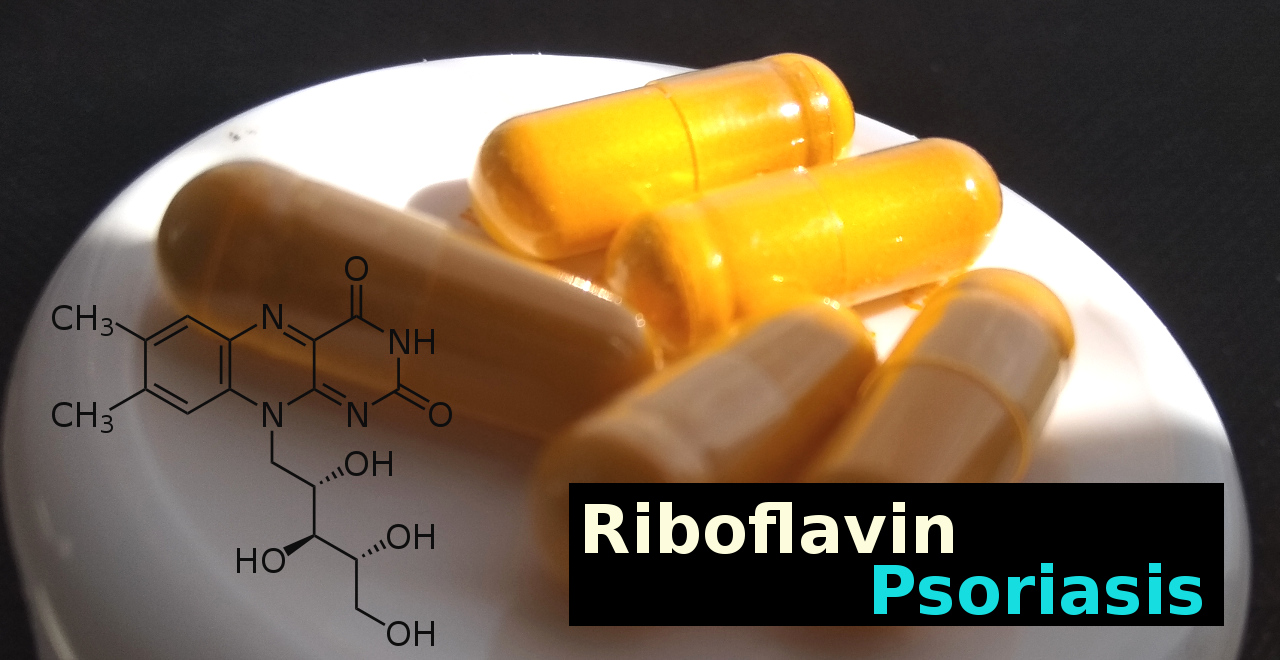 Vitamin B2 As A Possible Psoriasis Cure

Riboflavin as a potential psoriasis cure was researched in a few studies published in the 1950’s. The results of some were very encouraging and many psoriatics significantly improved their state using riboflavin treatment!

In the end of this blog post you will find out which riboflavin supplements might be the most effective for psoriasis.

The most positive results were published by MERLIN T-R. MAYNARD, M.D. who have not reported how long it took to clear up psoriasis in his patients but riboflavin definitely worked.

He decided to try riboflavin in his patients as he learned about it being present in psoriasis plaques in high amounts.

”
I located one article published in 1942, in the Schweiz. Med. Woehensehrift (1), in which the author found that riboflavin was demonstrated in increased amounts in the plaques and scales of psoriasis by spectrometer examination: this is hard to explain, and on its face would seem to be a possible contra-indication to the use of riboflavin in the treatment of the disease.
” [1]

At the time he was writing the results for publication more than 200 of his psoriasis patients received or were receiving riboflavin.

”
At the time of the writing of this paper I have treated over two hundred eases, but due to incomplete follow up have only one hundred and forty-eight such eases on which to base this study. All these eases were given injections of riboflavin (5-10 mgm. intramuscularly, usually once weekly) as a basic treatment. It has also been given orally in daily dosage coincident with the injections. In all eases local treatment has been dispensed with until proof of the patient’s response is established, and then only used on “survival lesions,” or in a few instances for faster cosmetic effect.
” [1] 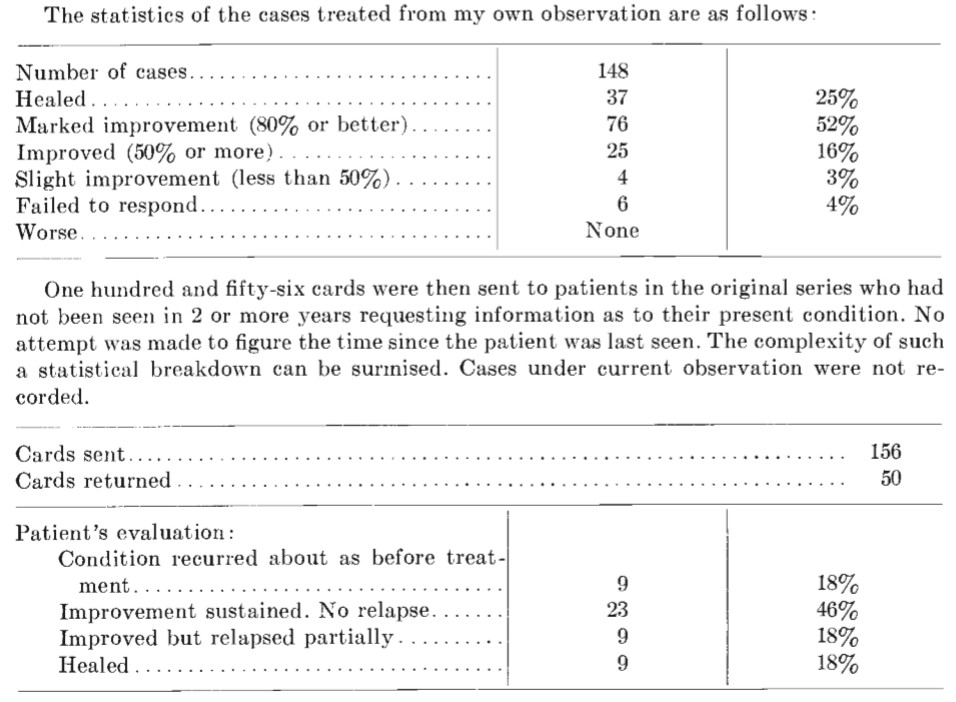 This very positive results with riboflavin treatment made other doctors try this b-vitamin for their patients as well.

Doctor HERBERT A. LUSCOMBE, MD published his observation with back then new – coenzymated (phosphorylated) form of riboflavin – administered to patients intramuscularly (by injection into the muscle) at dosage of 50mg of riboflavin once a week.

”
Relatively recent discoveries on the mode of action of riboflavin have suggested its use in some of the scaly skin diseases of man. B2 deficiency in monkeys sometimes results in the appearance of a scaly dermatitis, and in man eruptions of this type are also associated with the B2 deficiency state…
…
Most important from the point of view of this study is the necessity of this vitamin to the stress response, as shown by the complete failure of the carbohydrate production response to stress in riboflavin deficiency. It has been concluded that riboflavin is required either for synthesis of the adrenal hormones or else it functions in the mechanism concerned with their elaboration. Because of this relation B2, would seem to be a logical form of treatment for a disease such as psoriasis where the appearance of the disease or its exacerbation under stress are well-known facts.

Dietary or supplemental riboflavin is phosphorylated in the intestines for absorption. As a phosphate it is carried to the liver and kidneys, where it is further synthesized. Accordingly, for our use, a solution of phosphorylated riboflavin was prepared at a concentration of 50 mg./1cc.
…
Over a period of almost three years this highly concentrated preparation has been used in the treatment of a selected group of psoriatics. Only cases of at least moderate to severe involvement were chosen in an attempt to better evaluate the drug.

A total of 44 cases were treated and followed sufficiently to be included in this report. There were 18 female and 26 male patients, varying in age from 8 years to 67 years. All patients had bad their eruption at least six months, and in 17 the disease had been present more than 10 years
…
This drug was then administered once weekly in 50 mg. doses with continuation of a local application such as mercurial ointments or an emulsion of olive oil and calcium hydroxide solution. Coal tar and ultraviolet light were not used when riboflavin was administered. The length of treatment varied in the individual case from 4 to 16 weeks of continuing weekly injections.

The 45.5% who showed marked improvement were so designated because the patient and I agreed that the results were excellent, considering the patient’s response to previous types of therapy and his response to seasonal changes. The improved group were definitely better and satisfied with the results of treatment, but in my opinion these results might have been obtained with any other good form of outpatient therapy. The 11.3% who were unimproved bad shown no appreciable effect from the drug in six weeks, and its use was discontinued.
” [2]

The most interesting part of the excerpt above for me is the one about the importance of riboflavin for proper stress response of the body. In psoriasis patients there is a significant autonomic nervous system dysfunction – the fact which I mention all the time on this blog for years!

The Riboflavin-Psoriasis study by Bencel L. Schiff, MD and Arthur B. Kern, MD

In 1958 doctors Bencel L. Schiff, MD and Arthur B. Kern, MD published the results of treating their psoriasis patients with riboflavin. [3]

77 of 90 psoriasis patients were treated weekly with intramuscular injection of 50 mg of riboflavin-5-phosphate sodium (equivalent to 35 mg of riboflavin) over a period ranging from 1 to 4 months.

40 of those 77 patients received riboflavin orally at dosages of 7.5 mg three times daily.

The remaining 13 patients received riboflavin injection daily (50 mg of riboflavin-5-phosphate sodium) for a period of 4 months.

Of 90 patients 33 showed some improvement but the other 57 patients not (except some itching relief in some of them).

Doctors concluded that daily injections nor the additional oral supplementation had no added effect compared to weekly riboflavin injections.

Riboflavin in different forms is commonly used as a color additive in foods.

In supplemental form you might want to try riboflavin-5-phosphate in a form of capsules or sublingual tablets. One of the least expensive products is from Natural Factors – BioCoenzymated Riboflavin-5-Phosphate.

If you want to get all the B-complex vitamins in their coenzymated forms you might want to buy this product from Source Naturals.